The park has already had a number of challenges surrounding it and construction hasn’t even begun yet. The project was announced in mid 2012 by London Resort company holdings (LRCH) as “Paramount Park”. That’s right, this announcement was 8 years ago.

In May 2014, the park was granted ‘Nationally Significant Infrastructure Project’ status. This means planning proposals do not have to meet local requirements or go through the local authorities, instead being able to submit the plans directly to the secretary of state. At this point in time it was hoped that official plans would be submitted in 2015 with an opening date of 2019, yet here we are in 2020 and no construction has been started yet.

In early November of 2014 (5th to the 14th) public consultations were held. Interested parties were given more information about the plans for the 3.5 billion pound project and were able to give their views on the park. The information given then, was that the opening was going to be pushed back to easter 2020.

In January of 2015, 388 acres of land was purchased for the purposes of the resort. The purchased land is called the Swanscombe Peninsula.

By April 2015, travel and transport concerns came to the forefront of a debate in a public consultation where all sorts of concerns came out. Some people were worried that the proposed 14,000 spaces would discourage people to take public transport and subsequently cause even more issues on the roads in the area. Others raised concerns that if the 14,000 spaces prove to be inadequate, people would be forced to park in the surrounding area, impacting residents and other businesses. A range of ideas on how to combat these issues were thought up, including having parking structures in Essex and even having a cable car system over the river. This idea was dubbed the “park and glide” solution.

In September of 2015, it was announced, yet again, that the opening date needed to be pushed back. The proposal date was now due to be in mid 2016 meaning the opening date of the park was set to be in 2021. This pushback was to tackle issues raised in the public consultation in terms of transport links and the impact the park will have on the environment.

April of 2016, delays were announced to the second quarter of 2017. This is the 3rd time delays have been announced. There was no reason given to the public for this delay.

November of 2016 saw some major changes to the proposed park. The plans included a swimming pool that connects some hotels and the scrapping of a water park that was in earlier proposals. Along with the swimming pool connection hotels, the hotel design also changed from urban to more of a resort style.

In February of 2017, some of the companies behind the plans made new appointments. Bosses announced new senior positions on February 10 2017, that they said “will help drive forward the plans for the entertainment resort”.

June 2017 saw the news that Paramount Pictures had parted ways with the LRCH. Even though this shock split took place, the developers still aimed to have the plans for the multi billion pound theme park submitted by the end of 2017, despite losing paramount film group. 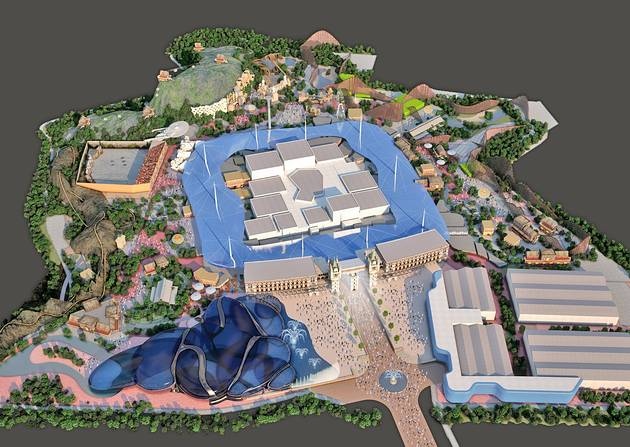 Just 8 weeks after saying they were aiming to have the proposal done in 2017, the LRCH released a new time table where a final round of public consultation would take place in early 2018 and that a Development Consent Order application would be submitted in spring.The company was meant to submit its plans in 2017, if they had done this by 2023, the park would of been opened. The estimated cost of development also increased from 2 billion to 3.5 billion pounds. It is not known what kind of rides/ attractions are actually set to be built, but previous applications have included everything from cinemas to nightclubs, yes you read that correctly. Night clubs. 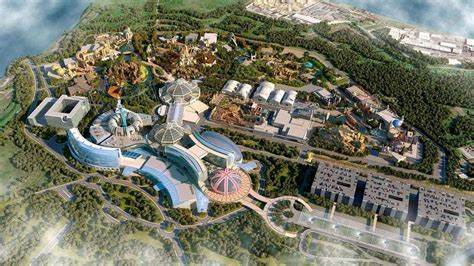 It was November 2017 when we heard the new name and saw the new logo for the project now called “The London Resort”. But this raised a lot of confusion after this was revealed to Kent business groups and attendees at the Construction Expo based in Kent. It was also rumoured that the companies involved in the development were preparing to announce some big name sponsors and new partners before the 5th and final round of public consultation taking place in early 2018

March of 2018 saw news that the developers were aiming to partner with multiple different property partners to have different areas contained within the huge park. They also yet again pushed back the submission of the planning of the park to 2019 but did not give a more specific date. As well as this they spoke on how the park is going to be split into 2 separate “gates” with gate 1 boasting 6 themed areas with rides, as well as multiple hotels with over 3,500 rooms. With gate 2 to boast more hotels and more themed areas. This is all the information given on gate 2. It was November of 2018 that it was announced that again, the opening date of the park was pushed back to 2024.

April of 2019 saw a deal between the park and ITV meaning that ITC characters and shows will be incorporated into the park. The deal was for an undisclosed amount.

Just 8 short weeks after the announcement of the deal with ITV, they made a further announcement that shocked many. A new deal between Paramount and the park took place, meaning that the extensive portfolio of the park now included Paramount, the BBC and ITV. The London Resort chief executive had this to say. “The new partnership with Paramount is fantastic news for everyone. Now the best of Hollywood will be joining the best of British from BBC Studios and ITV Studios, to create amazing and unique experiences for the whole family.”

In July 2020, a planning report is still yet to be submitted but the (LHRC) are aiming to submit the permissions by the end of 2020, but with everything else happening at the moment, who knows when these plans will be submitted? If ever. In conclusion, in the 8 years since the idea was proposed, we have had no progression and we are no closer to our theme park and with the state of our economy prices for the construction could very well yet increase again. But could the park be the thing to give a boost to the economy of the UK?