What caused the Battle of Los Angeles?

December 7th, 1941, saw one of the most famous events of the Second World War unravel with the Japanese bombing of the U.S Coastal Navy Base, Pearl Harbour in Honolulu, Hawaii. The aim of the attack was to prevent the United States Pacific Fleet from stopping the planned Japanese military conquest in Southeast Asia. The attack killed 2,403 Americans while 1,178 were wounded, as well as destroying 180 aircraft and damaging 8 destroyers, while sinking 3. This would see the U.S officially enter the Second World War and raised paranoia about further Japanese invasion, which introduces us to one of the most mysterious wartime occurrences which took place only 2 months after the attack on Pearl Harbour. Los Angeles, California was assumed to be the next target for Japan to bombard.

On the 25th February 1942, the city of Los Angeles was plunged into darkness at approximately 3:00am with the haunting explosions of anti-aircraft guns going wild in the night sky. It seemed that the fears of U.S intelligence had come to fruition, with an assumed raid by the IJAAS (Imperial Japanese Army Air Service). The streets of L.A were pitch black, only illuminated by the shells and overhead searchlights aiming for this seemingly invisible threat. The U.S Military fired around 1,430 rounds of artillery with witnesses, both army and civilian, reporting one or multiple objects above. Strangely, as the barrage went on – nothing seemed to be affected by the anti-aircraft guns nor had anything been shot down, yet radar had clearly picked up something on the monitor that was a big enough threat to send L.A into a blackout that lasted until 7:21am. The artillery fire lasted until 4:14am, 1 hour and 14 minutes after the first alert was given. Sadly, 5 lives were lost during this incident with 3 people crashing their cars in the blackout and 2 suffering heart attacks. There was only one photo of the mysterious battle ever taken, with the searchlights all focused on a single spot in the sky. What could have caused such a reaction and yet cannot be caught? Let’s go through some of the speculation.

The talk of another attack by Japan began when newspapers such as the L.A Times stated that Japanese aircraft were sighted down the California Coast. With the alert being so high after Pearl Harbour, L.A was assumed to be the next target after a submarine sighting 2 days before, on the 23rd February – making a possible air-raid from the Japanese a very plausible explanation. However, this explanation falls short when we consider no actual plane wreckages were seen or found shot down after the blackout. Some civilians came forward with claims of seeing Japanese aircraft, but illusions of the light can be responsible for many hallucinations or slight glimpses of objects that may not be there at all. Apart from wreckages, we can assume the Los Angeles searchlights would have pinpointed a flyover making it easy for the anti-aircraft gunners to spot. There were rumours that a Japanese Aircraft Carrier had been sighted off the coast of the San Francisco Bay Area, resulting in the city of Oakland shutting its schools and ordering a blackout, possibly causing a domino effect of panic as a result.

Presidents Franklin D. Roosevelts personal secretary came out and spoke openly about the occurrence, his claim was that the Battle of Los Angeles was a false alarm and there was nothing in the night sky on February 25th, merely post-Pearl Harbour induced paranoia sending the U.S Military into an overreaction.

Most have dismissed this claim, as nearby radars detected something heading towards the California coastline which was not identifiable. Civilians and soldiers alike also reported seeing different things, imaginations running wild among the explosions is to be considered a possibility, even if there was a small physical object it wouldn’t have lasted long amongst the constant bombardment of anti-aircraft fire.

The strongest and most popular explanation for what triggered the Battle of L.A was that an advanced meteorological balloon had been the culprit for the sudden panic. Documenting the event in 1949, the United States Coastal Artillery Association managed to identify the balloon, which was launched at 1:00am that day.

They concluded that upon spotting the balloon, personnel began attempts to bring it down with other anti-aircraft guns joining in the process and ultimately ended up shooting at imaginary targets. There were no materials discovered after the battle of any such balloon, not that there would be much left to find after being caught in rapid explosions. 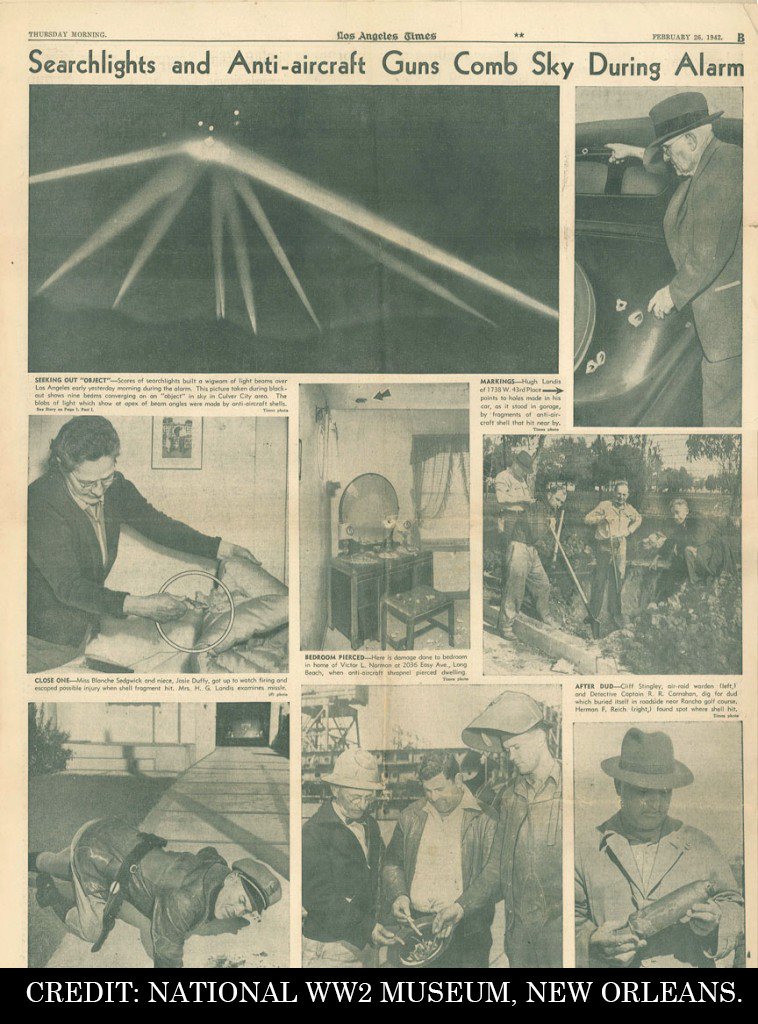 “Foo Fighters” was a nickname used by allied aircraft pilots to describe UAP’s (Unidentified Aerial Phenomena) that were witnessed over European and Pacific areas. The strange lights were thought to be a breakthrough weapon created by the Nazi’s, though not even the Nazi or Japanese pilots knew what they were, as the objects allegedly danced around aircraft while changing colours “like a Christmas tree” before vanishing. Some of these enigmas would apparently get in such close range that they’d actually cause odd engine malfunctions. These ‘balls of light’ that toyed with planes were reported from around November 1944 onwards, but could it be a possibility that the Battle of Los Angeles saw the first-ever Foo Fighter encounter? This theory is popular due to government silence, eyewitnesses and a certain contradictory letter written 8 days after the incident by Army Chief of Staff – General George C. Marshall to President Roosevelt that said: “This headquarters has come to the determination that the mystery airplanes are in fact not earthly and according to secret intelligence sources they are, in all probability, of interplanetary origin”. These documents have previously been disputed, and the Foo Fighter theory dismissed as a result of its science-fiction style story.

This incident adds to the many mysteries of the Second World War, unexplained and remains to be given a solid answer. The Battle of Los Angeles may have been one big hallucination, paranoia or some physical object(s) that could not be shot down. Something on radar sent Los Angeles into a blackout and caused havoc with over 1,430 rounds of artillery being fired to bring it down. My personal view would be post-Pearl Harbour paranoia caused a simple meteorological balloon blown astray to become a threat. Although, being able to identify something such as a big balloon should be simple with the standard of searchlights pictured throughout this discussion. An off-world vehicle would be an incredible scenario to imagine, however I think we can put our wishes aside to deem this unlikely. Japanese aircraft may have been looming around the California coastline, but considering no wreckages were ever found – it’s safe to assume this only applied intimidation with no actual follow-up attack. Unless information, unknown to the public, is released – we may never fully solve the cause behind the sudden battle against an invisible enemy.