Netflix’s New Film Cuties: ‘If It Makes You Uncomfortable, It Should’

Molly Dine
Everyone on the internet is mad about something again – however this time there is actually good reasoning behind it. (Even the law is getting involved!) 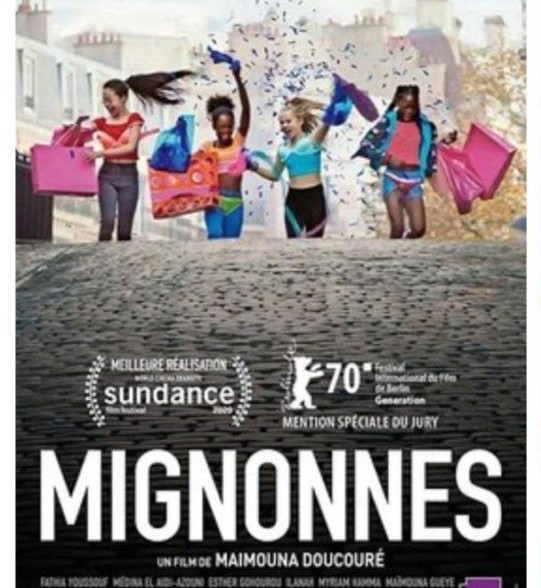 What is the film Cuties about?

Mignonnes, or better known as its English title Cuties is defined as a French coming-of-age drama film. Written and directed by Maïmouna Doucouré, the movie was first released at Sundance Film Festival, before internationally releasing on Netflix.

The original synopsis of Cuties provided by Netflix read: “Amy, 11, becomes fascinated with a twerking dance crew. Hoping to join them, she starts to explore her femininity, defying her family’s traditions.” However, after ‘#CancelNetflix’ began to trend on twitter by disturbed users, Netflix altered the synopsis of the film to “Eleven-year-old Amy starts to revel against her conservative family’s traditions when she becomes fascinated with a free-spirited dance crew.”

Why is Cuties facing backlash?

Cuties features real thirteen-year-old’s, playing eleven-year-old girls, wearing provocative outfits such as tight booty shorts and cropped tops. The controversial film often focuses in on their lower halves as they twerk and gyrate to the camera, groping one-another. Twitter users are calling out the director for sexualising the children; as well as Netflix for showcasing this to the streaming services one hundred and ninety million users.

There’s also the fact that Netflix decided to release a different movie poster to the original French version. In the original poster, we see the four young girls running down the street after going shopping. Compare this to the Netflix edition – in which the girls are covered in less clothing and placed in sexual positions. From the hour and thirty-six minutes of  content, many are calling one certain sequence of scenes the most disturbing. It begins with the character Amy, trying to seduce an older family member to get out of trouble for stealing his phone. Then, to the viewers dismay, she pulls down her clothing and photographs herself nude and vulnerable to post online. Most of the public worry for the actresses playing these characters, saying they are having their childhoods stripped from them. 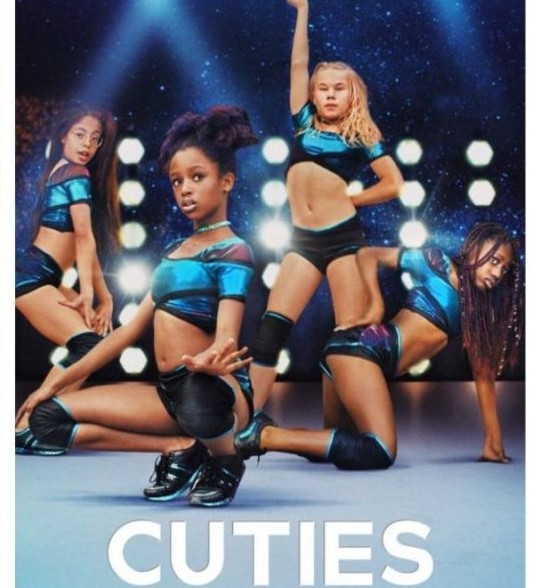 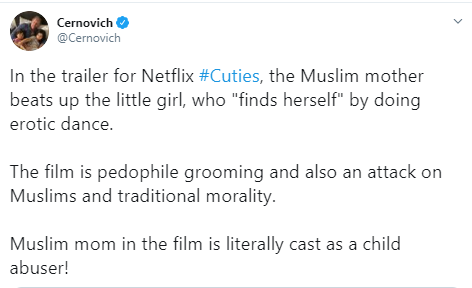 People in defense of the director and her intentions are addressing the other ways in which children are being sexually exploited. They say the movie is supposed to sum up how social media, music and celebrity role models have constructed a path for the children of today. For example, one chat show discussed the singer Cardi B and her new overly sexual song that many children are singing and provocatively dancing along to on the app ‘TikTok’.

Another example is the tv show Dance Moms, which generated fame for many young and well-known dancers. One mother, when asked about Dance Moms and the sexualisation of the young girls, discussed how she would watch the show with her daughters. She revealed she was shocked at some of the outfits they would wear and the performances they would partake in. However, another mother said that they were ‘not as bad’ as the ones showcased in Cuties.

The director herself spoke out on a panel at the Toronto Film Festival, she explained that Cuties is a social commentary on how young girls are treated.

‘It’s because I saw so many things and so many issues around me lived by young girls, that I decided to make this film and sound an alarm and say we need to protect our children.’

An important matter currently is the #SaveOurChildren movement. The story the director was trying to tell could have been impactful along with this – if the way she chose to represent the issues wasn’t creating a distraction. Perhaps if the story was told through a documentary, interviewing children at the age of the characters and speaking to specialists, all the cancel culture from angered parents and members of the public would have been avoided. 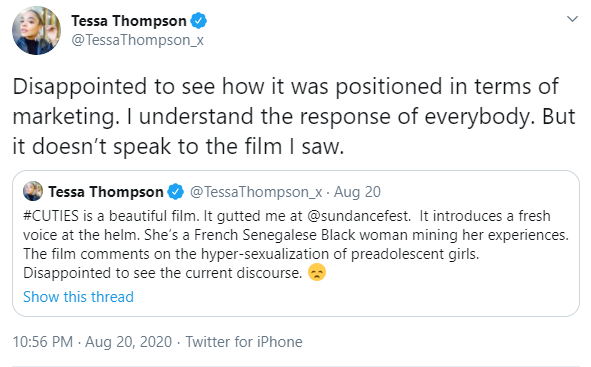 The Influential Views on Cuties

Unlike most of the dilemmas that trend of twitter due to the large number of angered users, many influential people chose to speak out. From Politicians to celebrities, a range of responses have come through about Cuties. Marvel actress Tessa Thompson (known for her role as Valkyrie) first watched the film upon its initial release at Sundance Film Festival. She took to Twitter to share her opinions about how the marketing team were not correctly presenting the ‘beautiful’ story. For this, she received backlash from fans and Twitter users, but she stated that she understands the response of everybody.

Somehow left-wing and right-wing parties are trying to further their political feud with opinions on this movie. However, Republican politician Senator Ted Cruz has addressed a letter to the Department of Justice. In this letter he called on Attorney General Bill Barr to ‘investigate whether Netflix, it’s executives, or the filmmakers violated any federal laws against the production and distribution of child pornography’ during production.

The public are demanding Netflix Partners to speak out about the movie. The Obamas announced in 2018 that they had entered a partnership with the streaming service, whereas Harry and Meghan recently signed a deal with them to produce content. Twitter users are saying that if they really wanted to use their influential powers for good, they would tell Netflix to get rid of Cuties. People are most offended by Meghan Markle’s lack of interaction, as she usually uses her platform to speak out on issues in the world.

The Good that has come out of Cuties

Despite the portrayal of the young girls in the movie and whether you are for or against it remaining available to stream on Netflix, a conversation has been created and brought to the limelight. The debate on the representation of sexualised children has got the topic being discussed on the news, talk shows and all-over social media.  The message is getting spread about how vulnerable children are, as well as how corrupt Hollywood and big companies such as Netflix could be.