After being a student at this college for two years I never realised how much history there was in the buildings around me. The whole place began with Martina Bergman Osterberg. she was an incredible Swedish lady who was a huge supporter of women’s suffrage in Sweden, and when she came to England, she changed education for good.

She was born in 1849 and later on in life at the age of 30 started to pursue her dream at the Royal Central Gymnastic Institute in Stockholm. In 1881 her career changed course as she was appointed to the London school Board which was when her teaching could begin. In 1895 she moved to Hampstead and opened a Physical training college where she could teach young women how to exercise and play sports for health living. Ten years later she moved her college to Dartford, so she had more outdoor space to teach and changed its name to the ‘Bergman Osterberg Physical training College’. Here she was able to teach sports like gymnastics, cricket, lacrosse, Hockey, Cycling and Swimming.

One of the sports that Osterberg’s students learned was Basketball by a visitor from America, but the young women believed that it wasn’t quite appropriate for the ladies of that time, so together they adapted the rules and called it ‘Netball’. Netball became more and more popular and is still played in the same way today by thousands of people across the world. I learnt Netball when I was at school and it’s still my favourite sport to play, so to learn later on that I attend the college where it all started amazes me.

While learning at the college, one student called Mary Tait felt that the uniform wasn’t flexible enough for playing sport due to the fact they were wearing long dresses and tight corsets. This is when Mary invented the gym slip. The gym slip is a Tunic that has a pleated skirt that falls just below the knee when standing and when they are kneeling it touches the floor. 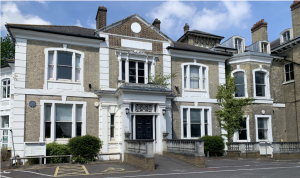 Over the year’s Madame Osterberg trained over 1300 teachers at the college and these teachers and students went on to teach what they learnt around the world. The buildings that she taught in are still standing today across the campus, some have been developed and are still in use while others are waiting to be developed. To keep honouring her name and her role in the college’s legacy, the ‘Osterberg sports centre’ still carries her name.

Martina’s accomplishments continue to affect children today as her work still forms a huge part of the curriculum.

See how Osterberg’s legacy lives on in this video: