The biggest narrative of Khabib’s last fight was of course how he will deal with the passing of his father Abdulmanap Nurmagomedov, who passed away due to Covid complications. Abdulmanap had been Khabib’s head coach since he was born, getting the young Khabib to wrestle bears and pushing his son to the limits up in the mountains of Dagestan, truly molding him to be the fighter he is today.  Abdulmanap’s legacy will be one of an army of Dagestani fighters that are taking the MMA world by storm. Most of these fighters were under his tutorship, like Islam Makhachev, Zubaira Tukhugov, Abubakar Nurmagomedov, plus others who are proving to be tricky customers in the UFC and other MMA promotions around the world.

Abdulmanap only ever got to corner one of his son’s UFC fights as most were in the US and he could not attain a visa to enter the country. For UFC 242 the event was held in Abu Dhabi, so he could finally coach one of his sons fights in the UFC. From the visa issues this meant Khabib had to get an American coach so he could have a team for his fights. He landed on Javier Mendez of Aka (American kick boxing academy) a top team, including the likes of former heavyweight and light heavyweight champion Daniel Cormier. Javier is now Khabib’s head coach and even he was surprised about the retirement, finding out at the same time as everyone else, so this begs the question – was the retirement truly planned or was it more to do with emotions? 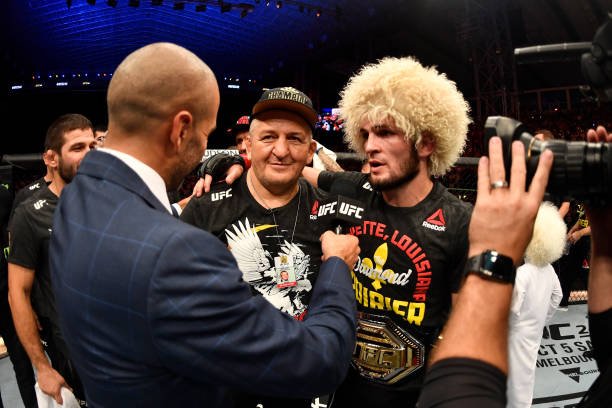 Khabib’s father’s vision for his son was to reach 30-0 then retire, and with Khabib being 29-0 it is possible that he will fight for one last time to reach the goal. Therefore, UFC president Dana White is very skeptical of the retirement and will not strip Khabib of his title until he has had time to think it over and discuss it with his mother. The Russian fighter has also said in multiple interviews that 30-0 is appealing. That’s why it is very possible we will see him in the cage once he has convinced his mum that the dream must be completed.

If UFC 254 was the last time we see Khabib in the cage, then it’s been an amazing ride, where he has established himself as one of the best fighters to ever – quite possibly the best – depending on who you ask. He was so dominant in all of his fights, only ever officially losing two rounds and even they were close, also capturing the lightweight championship defending it three times. Khabib has shown himself to be a champion in and outside the octagon. A truly humble and respectful athlete, and the perfect role model for any young and aspiring fighters out there.

If the decision to retire does stick, then where will the lightweight division go from here with all the possible matchups and questions now surrounding the division? The next lightweight fight to go down with huge complications is Dustin Poirier vs Conor McGregor. This money-making showdown is set to go down on the 23rd January, it has been confirmed that it will not be a title fight with the fate of the belt still unknown, but you can be sure that the winner of this match up would get the shot if the title is vacant. The Opponent for the vacant title will most likely be Justin Gaethje.

He just fought for the title but it’s still clear he’s one of the best in the division and even had a good showing of himself against khabib. You also have the interesting case of Michael chandler – the former Bellator champion – who left the organisation to join the UFC this year and is automatically put into the title picture. The 34-year-old was a backup fighter at UFC 254 and it has been made clear that all he needs to do is get one win and he will get a title shot, so it will be interesting to see who the UFC pair him up with.

As the 30-0 is still on the cards the question is who will khabib fight for the last time? If you ask most hardcore fans there will one name on everybody’s lips, Tony Ferguson. El Cucuy and Khabib have had a long-standing feud where a total of 5 fights were canceled, from any reason possible like injuries to a worldwide pandemic stopping the fight from going ahead. Even though Tony lost his last fight to Gaethje, fans still thinks he would cause the champion difficulty with his excellent stand up and submission skills. Khabib has never fought anyone with Tony’s Jiu-Jitsu pedigree and if the fight never happens it will be one big ‘what if’ over each man’s career. Another potential fight for Khabib is a super fight with one of the best to ever do it GSP (Georges St-Pierre). Khabib has been angling for this fight for some time saying it’s been his dream to fight him. It would take a lot to convince GSP to come out of retirement, but he had said he was intrigued about the fight. The problem a lot of fans have with the fight is St-Pierre’s 39 years old and has only fought once in 7 years and that was in 2017, so khabib would have a huge advantage going into the contest due to his activity but he feels he needs the fight to prove he’s the best to ever do it.

Surely Khabib really wants to prove that he is the greatest mixed martial arts to ever step foot on this world. In his retirement speech he asks the UFC of one thing, to be number 1 on the pound for pound list, showing that everyone believes he is the best in the UFC right now. Nobody can deny that he is not in the GOAT conversation, he’s such a dominant fighter never lost a fight, and wasn’t even close to it. Some might say he’s not the best but his impact on the sport has been felt all over the world. The chances of Khabib fighting again are looking good, but if it is the last time, he’s had one hell of a career, and will be surely missed by everyone in the MMA world.