Willow Stening
We review Home, by Warsan Shire as performed by new students of The Miskin Theatre. 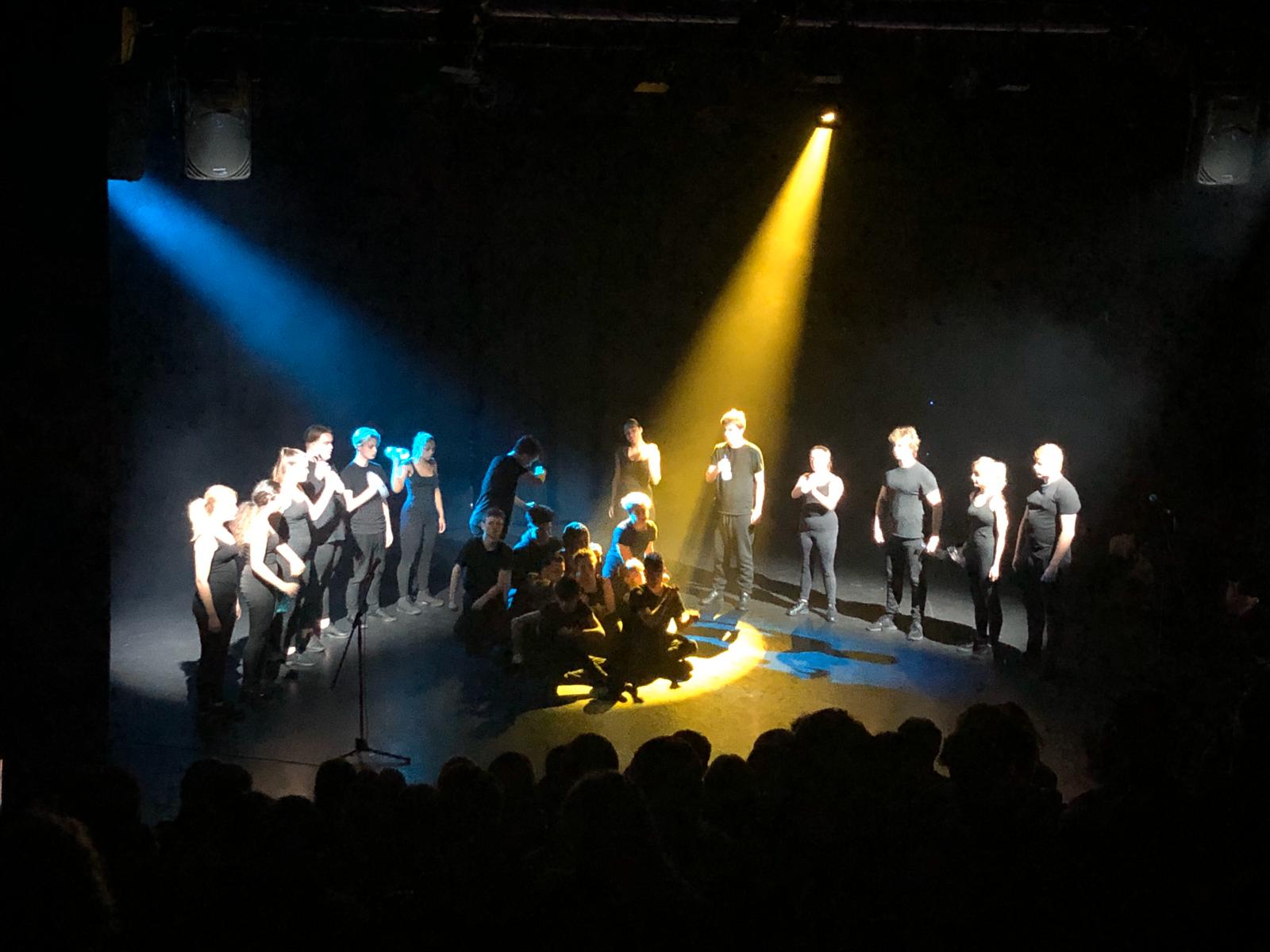 “On Tuesday October 8th, I was lucky enough to witness a beautiful performance by new students of the Miskin Theatre, recreating the poem ‘Home’, written by Warsan Shire. This all came together through a combination of acting, dancing and musical theatre.

The portrayal was attention grabbing, challenging and entertaining – if this performance is anything to go by, I believe you should attend upcoming Miskin performances.

Shire, who was a young poet laureate from 2013-2014, wrote the poem based on the difficulties faced by refugees. The poem was heartfelt and emotional, making the audience sympathetic for the troubles that refugees face.

There were five different groups of students in the Miskin that performed, each were given a different section of the poem in which they had to create an act based on their section. The overall performance flowed smoothly through each section and the story was told really well through each act leaving you thinking, is that really how refugees live?

Unfortunately, this performance was a one-time thing preparing the students for what lies ahead, but I do recommend you keep a look out for any upcoming performances by the Miskin Theatre, because their performances are breathtaking and will leave you with goose bumps.

I can only give the overall performance a 4 out of 5 star rating, as the students will increase their talent throughout their years at North Kent College. I’m sure I’ll see some of the students on TV and in films in later years.”

“Overall, the performances focused on themes that the general public struggles to recognise or encounter. These themes specifically included racism, terrorism, struggling to fit in as an individual and how society strips us of aspects that make us unique. Each play faced a single theme – with these put together, the performances brought these issues to the audience’s attention, and left a shocking impact alongside that. What I particularly noticed during the duration of the show, was that in contrast to how the audience was talking as well as bustling at the beginning, through the transitions they remained quiet, and merely took what they were seeing into account. People around me also began to lean forward rather than slump back into their seats, which I thought was also quite noteworthy.

The first performance focused on how, in society, we are not as safe as we think we are. This was portrayed through several actors taking the role of civilians, presumably those who are lower class rather than higher class. At the start of the performance, bags were laid in the centre of the stage, as these individuals began to scramble for them, gradually, yet desperately. Further into the show, more actors that took the role of what I believe to be the military, who eventually shot the people down. The symbolism was worked excellently into the performance. It also fit into the theme, as the meaning of the performance had to be worked out rather than be blatantly seen – much like how the supposed security which is meant to protect us must be seen into. I believe that this was the main drive of the play.

This performance was followed by two others – one that focused on racism, one that focused on society stripping you of what makes you unique as an individual. I do believe that the theme of the last play could’ve been clearer. The meaning was overshadowed by the previous three, which were all rather evident when it came to showing the audience what they intended to bring attention to. The second performance was my personal favourite, as it portrayed situations that do occur in real life – immigration, and the struggles individuals go through due to it. One specific scene showed a group on a boat, struggling to cross the sea, which was understandably grim in nature. It presented a woman having her baby taken away, as well as individuals falling off the boat and being left behind in the desperation. The dark portrayal didn’t shy away from how drastic these issues are in reality, much like how mainstream media typically tends to. It gave perspective on how distressful these problems are for those who simply desire to flee away from war, who want to live a better life regardless of whether they must risk their life for it or not.

The third play was also impactful in its own means, too. I recall one scene in particular where the lights shut out, then abruptly, the lights flashed, and paper was shredded across the stage. The performance did incredibly when it came to keeping the audience gripped, especially through the music along with the instrumentals. Many individuals had many different roles, as well as this – some played music, some acted whilst some danced. I believe it did a great job when it came to valuing and putting people’s talents to use. This also links with the theme of the performance – by presenting these individual’s talents to the audience, they are contrasting to the message they’re conveying – how society rids us of our talents.

I found all the shows enjoyable, especially considering it was the students’ first time putting on a play within the college. In each of their own ways, they portrayed deep meanings that are generally overseen.”

“First of all I thought that the whole stimulus was excellent as it was a real eye opener as to how war in other countries is almost forgotten about by people like us who are living in a war-free environment and how we take so much for granted. This stimulus shows how much it affects so many people both physically and mentally and how difficult it is in that situation of living in danger every day and not knowing if your family are going to be safe when they come home.

One piece ended with the words ’don’t put a child on a boat unless the water is safer than land’. The group repeated this several times with a solid tone and this really made me think about what they were saying and how it was a very sensible comment as many would do it in desperation of getting their children to safety at all costs, however if the water is not safer than land then the whole action is contradicting its original cause as it is potentially putting their child in danger rather than out of danger. The fourth piece was the best one to watch in my opinion as I felt like I was watching something straight out of Britain’s got talent as the choreography was absolutely perfect and on the eye it was unbelievable to watch and it made me want to watch it even more than originally as I was so amazed by the excellence of the choreography of the performers.

The only concern I had throughout the whole of the five performances was the fact that I could not tell the difference between the first performance and the second performance as it was not clear that a new performance had begun. However I did have a lack of knowledge on how the pieces were going to work as I originally thought it was going to be one big group effort and then after the second performance, I had realised that the first two were not the same one. However, apart from this minor miss-understanding, I could not fault any group for incompetence at all and I thought every group clearly displayed the issue of war in the middle east and how people are in danger every day – how they are almost ignored by the more privileged people in the world as there is a total lack of awareness for most of us. After watching this performance, I feel very passionately that people should be educated much more about these kinds of issues and how we can help.”

who kissed you dizzy behind the old tin factory is holding a gun bigger than his body you only leave home when home won’t let you stay.

no one leaves home unless home chases you fire under feet hot blood in your belly it’s not something you ever thought of doing until the blade burnt threats into your neck and even then you carried the anthem under your breath only tearing up your passport in an airport toilet sobbing as each mouthful of paper made it clear that you wouldn’t be going back.

you have to understand, that no one puts their children in a boat unless the water is safer than the land no one burns their palms under trains beneath carriages no one spends days and nights in the stomach of a truck feeding on newspaper unless the miles travelled means something more than journey. no one crawls under fences no one wants to be beaten pitied

no one chooses refugee camps or strip searches where your body is left aching or prison, because prison is safer than a city of fire and one prison guard in the night is better than a truckload of men who look like your father no one could take it no one could stomach it no one skin would be tough enough

or the words are more tender than fourteen men between your legs or the insults are easier to swallow than rubble than bone than your child body in pieces. I want to go home, but home is the mouth of a shark home is the barrel of the gun and no one would leave home unless home chased you to the shore unless home told you to quicken your legs leave your clothes behind crawl through the desert wade through the oceans drown save be hunger beg forget pride your survival is more important

no one leaves home until home is a sweaty voice in your ear saying- leave, run away from me now I don’t know what I’ve become but I know that anywhere is safer than here