At just 15 years old, Maradona made his debut for Argentinos Juniors becoming the youngest player in the history of the Argentine Primera division. The midfielder spent five years at the club, scoring 115 goals in 167 appearances before making a $4 million move to Boca Juniors where he made his name. He won his first and only Argentine title with the club in 1981. Maradona moved to Barcelona for a then world record fee of £5 million after the 1982 World Cup. Due to injuries and illness, Maradona’s career with the Spanish giants wasn’t easy, but still managed to win the Copa del Rey, Copa de la Liga and the Supacopa de Espana in 1983.

In 1994, Diego Maradona was presented to the world as a Napoli player, where he was welcomed by 75,000 fans at his presentation. At the Italian club, Maradona reached the peak of his career and was made captain and soon became a fan favourite. In 1987, Napoli won their first ever Serie A title and won again the following year with Maradona as captain, also winning the Coppa Italia, UEFA Cup and Supercoppa Italiana during his 7-year reign. Even though Maradona was successful on the pitch, his personal problems increased. His use of cocaine led to a fine and his elimination from a number of games. In honour of Diego Maradona and all his achievements, Napoli retired their number 10 jersey.

In 1992, the Argentine left Napoli after serving a 15 month ban for failing a drugs test and signed for Sevilla, despite interests from Real Madrid and Marseille, where he played for one season. He played for Newell’s Old Boys between 1993 and 1995 before he returned to Boca Juniors in 1995.

Maradona earned 91 Caps for Argentina, scoring 34 goals. He played in four FIFA World Cups including the 1996 Mexico World Cup, where he captained his team to victory winning the Golden ball as the tournament’s best player. He made his national debut at 16 in 1977. Maradona was appointed Argentina head coach in 2008, but left after the 2010 World Cup where his side was knocked out by Germany in the quarter finals.

He went on to manage teams in the United Arab Emirates and Mexico and was in charge of Gimnasia y Esgrima in Argentina’s topflight at the time of his death. 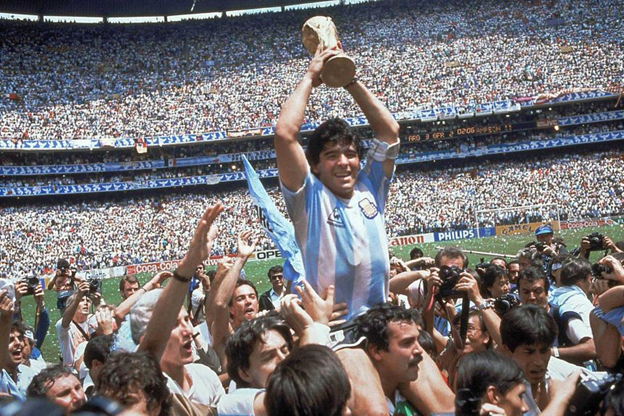 The Argentinian midfielder captained his national side to World Cup victory in 1986, scoring the infamous ‘Hand of God’ goal against England in the quarter finals. He then went on to score one of the greatest goals of all time minutes later.

The world pays tribute to a legend:

Brazil legend Pele took to twitter to pay tribute “What sad news. I lost a great friend, and the world lost a legend. There is still much to be said, but for now, may God give strength to family members. One day, I hope we can play ball together in the sky.”

Juventus forward Cristiano Ronaldo stated “Today I bid farewell to a friend and the world bids farewell to an eternal genius. One of the best of all time. An unparalleled magician. He leaves too soon but leaves a legacy without limits and a void that will never be filled. Rest in peace, ace. You will never be forgotten.”

Match of the day host and former England forward Gary Lineker who was part of the 1986 England side paid tribute before the Champions league matches: “By some distance, the best player of my generation and arguably the greatest of all time.”

Current Argentina and Barcelona footballer Lionel Messi shared photos of him and Maradona on Instagram with a tribute “A very sad day for all Argentines and football. He leaves us but does not leave, because Diego is eternal. I take all the cute moments lived with home, and wanted to take advantage to send condolences to all his family and friends. RIP”

Many other footballers, clubs and celebrities continue to share their tributes and condolences to the family of the football icon on social media.