The UK is back into level 4 of the Covid-19 alert scale, meaning restrictions are in place including social distancing and wearing masks in public spaces. Alongside these, more initiatives have been introduced, which appear to have split opinion. Pubs and Restaurants will now be closing at 10pm and groups cannot gather in numbers larger than 6. These pubs will not be able to open again until 5am the next day, and only table service will be available. However, some say that this will only lead to an increase in larger domestic gatherings.

‘Its just going to encourage people to go out earlier.’

‘I don’t really see the difference if you’re out before ten or after ten.’ 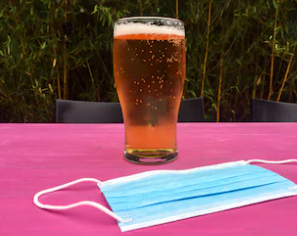 A Split in public Opinion

Of course, these new restrictions are creating some strong views from both business owners and members of the public. Some are pressing arguments that covid-19 does not know a clock; it will spread and infect regardless of the time or location. As well as this, many young people are openly challenging the rules. Students in Nottingham have rebelled against the curfew and have gathered in large groups outside pubs where they chose not to follow the new restrictions. ‘I don’t really see the difference if you’re out before 10 or after 10’. Police had to be called to send them home. Pubs, restaurants and nightclubs have been complying with the curfew, but some are not in agreement with it. Many owners believe that the curfew makes no sense, and it is not protecting people. ‘As soon as customers come outside the pub it doesn’t work’. They also worry about their businesses, and believe that many of those in the hospitality sector could be forced to close down by mid 2021 if the government does nothing to help them. ‘We should have done more back then’. Meanwhile some are saying that limiting time in public places and the amount of people will help the spread and hopefully bring the end of the pandemic closer. The government says that high infection rates are mainly in places where people gather socially, and alcohol is involved. However, with more decisions on social restrictions from the government due to be announced early next week, the question remains – to what degree will keeping people apart actually work?